The District downscaled the proposal after advocates complained, but concerns linger. 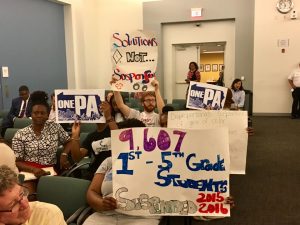 The School Reform Commission voted Thursday to establish a new in-house special education program for 100 students, most diagnosed with social-emotional disabilities and now placed in facilities run by Wordsworth. The new program will be run initially by the private education provider Catapult Learning before transitioning to full District control.

The vote, which was unanimous, came after hearing from parents and advocates for disabled students who want a firmer commitment from the School District to work toward educating these students, and others with similar needs, as much as possible in regular classrooms with extra support.

The District plans to set up the program in three schools, according to Cheryl Logan, the District’s chief academic support officer. The two sites chosen are Frankford High School and Penrose Elementary in Southwest Philadelphia.

The third planned setting is E.S. Miller, an alternative school, but many parents and advocates objected because Miller is not a neighborhood school, and it appears that District officials are looking for an alternative.

City Councilman Derek Green, who has a child with disabilities in the District, sent a letter to the SRC urging that the Catapult contract be limited to 100 students and that the E.S Miller site not be used.

“E.S. Miller does not have a traditional educational environment and does not provide the opportunity for students … to transition into the least restrictive environment within their school,” the letter said.

Commissioners and Superintendent William Hite acknowledged the role of advocates in scaling back the original plan, which was developed under duress to meet the needs of students who had been at Wordsworth Academy, a residential program in Philadelphia mostly for students with emotional disabilities. Wordsworth Academy was shuttered by the state last fall when a student died after an altercation with a staff member. Many of those students ended up at a day program run by Wordsworth in Fort Washington.

The District ended its contract with Wordsworth on June 30, but parents may still decide that they want their child in such a setting, as opposed to being integrated into the regular student population.

School Reform Commissioners Christopher McGinley and Estelle Richman, both of whom had opposed the original plan and fought for changes, noted the rights of parents to choose such a segregated setting if they think that is better for their child. They can also choose Wordsworth, even without a District contract. The Fort Washington program has contracts with several school districts.

Before any student can be moved to the new program, educators and the families must go through the process for altering the student’s IEP, or Individualized Education Program.

“Some families may opt to continue educating their son or daughter in the Wordsworth setting,” McGinley said.

“As we visited the sites, that is not what we saw,” Logan said. “We saw some blended learning opportunities in some of the high schools. … It was a very typical setting for a classroom where students have full-time support.”

The controversy over this contract exposed longstanding differences over the best way to educate students with disabilities – in separate settings with intensive programming or with their regular education peers as much as possible.

“Setting up these programs in buildings with the general education student population with maximum opportunity for inclusion should not be aspirational, it should be required,” said Gabe Labella, staff attorney at Disability Rights Pennsylvania.

Though District officials concede that they bungled the rollout of this new, in-house program, they believe the proposal will do exactly what the advocates prefer. Namely, it will take students previously in a private placement outside the city and move them into more integrated settings that District officials can more closely monitor.

Speakers also noted that special education diagnoses in general, and the label of “emotionally disturbed” in particular, are disproportionately applied to students of color, especially black students.

“As black students are 1.16 times more likely than white students to be identified with emotional disturbance, this segregation of students can result in greater racial isolation,” said Maura McInerney, an attorney with the Education Law Center. “We believe that the District must focus greater attention on building more inclusive learning environments in order to better serve their needs.”

But that requires, she said, “a carefully considered, robust plan to target resources and services, train teachers, principals, and staff, and change an entrenched culture of exclusion that has been reinforced over many years.”

Said parent Tonya Bah: “Segregation is still segregation, and unless we take inclusion seriously and begin to do that in public schools, we’re in trouble.”

McInerney emphasized that students with disabilities who are included with their regular education peers have better outcomes, including higher graduation rates, fewer suspensions, and more positive outcomes in employment and independent living. There are, however, studies showing that the inclusion of special education students – especially those with emotional disabilities – can slow the academic progress of their general education classmates.

The issue of racial discrimination also came up when another topic came up at the meeting – suspension of young elementary school students. Several speakers, including two state legislators and a spokesman for City Councilwoman Blondell Reynolds Brown, called for a ban on suspensions through 5th grade. Last year, the District ended suspensions for kindergarten students and plans to extend it, but said such a change in policy will take time and require extensive teacher and staff training in less punitive discipline strategies.

“These aren’t hardened criminals as some of the papers may try to paint our loved ones,” said State Rep. Jordan Harris. “At no point should a punishment be a lack of education.”

In other action, the SRC also passed a resolution that will allow for the development of Keystone Opportunity Zones in the city, after passing amendments offered by School Reform Commissioner Bill Green that will protect the District’s interests. The resolution could result in more than $200,000 in additional tax revenue to the District.

And it approved a $6.7 million contract for the Opportunities Industrialization Center to operate a new accelerated school in the Opportunity Network that will specialize, initially, in training for the hospitality and banking industries.

The SRC also approved borrowing about $400 million to tide the District over as it awaits expected tax revenue. Philly schools do this sort of short-term borrowing every year because of a mismatch between when the District receives certain government funds, such as city real estate taxes, and when it must pay its bills.

The District received seven bids this year from banks that wanted to sponsor the loans, said District Chief Financial Officer Uri Monson. He said that it was an unusually high number of bids and that banks may have been attracted to the District because of its improving financial situation over the last three years.