Philly’s ‘Made Man’ serves with fidelity, recognized by national initiative 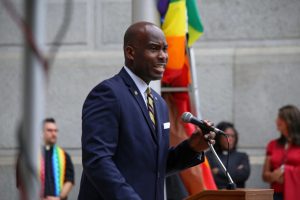 As the Congressional Black Caucus nears the conclusion of its 47th Annual Legislative Conference in Washington D.C., The Made Man Initiative will honor an impressive group of distinguished men impacting our nation. Philadelphia Councilman-At-Large Derek Green is one of them.

“It’s truly an honor to be recognized by Ky [Dele] and her Made Man initiative and to be a part of this group of men serving our City of Philadelphia and throughout the nation,” Green told the HuffPost this week. “I’m looking forward to the celebration and connecting with colleagues,” he said.

A life-changer with extraordinary achievements as a councilman, lawyer, advocate and father, Green consistently exhibits and engages community activism as his star rises on the national political scene.

Crediting former Philadelphia Councilwoman Marian B. Tasco with providing him opportunities to “learn about issues impacting our nation and proactively advocating for policy change through local channels,” the University of Virginia and Temple University law school grad previously served as Tasco’s special counsel.

Through his work with Tasco proposing and drafting legislation, as well as reviewing and monitoring local, state, and federal legislation, Green has served as counsel to the Philadelphia Gas Commission chair and the Committees on Finance and Public Health & Human Services.

Green was recently thrusted into the national spotlight as a result of the tragic events that took place in Charlottesville, on his alma mater’s campus, appearing on CNN to provide commentary.

“As a UVA graduate, the images coming out of Charlottesville are beyond troubling,” Green said last month. “More than ever we must strive to make our city, state, nation and world a better place. If we don’t, those who feed off the hate and violence in our world will win. This is not acceptable.”

Alongside thousands of other Philadelphians, Green attended a vigil in America’s birthplace of independence to honor the Charlottesville victims and to help expedite the healing process. Condemning racism and white nationalism, specifically calling out extremist groups including the Alt-Right, Ku Klux Klan and neo-Nazis, Green offered words of wisdom.

“That’s why even in the darkest hour, as we walk through the Valley of Dry Bones, we must press on and unite with other allies to defeat those who would inflict harm and attempt to reverse what we have achieved,” said Green, who was recently recognized by The Philadelphia Tribune as one of Philadelphia’s Most Influential African Americans.

As one of “The Made Man,” Green will be celebrated this evening with a host of other notable African American men that are leading and achieving in various fields of human endeavor.

“Until you start writing your own story, you can never own the narrative,” Dele told Sofiya Ballin (Philadelphia Media Network) earlier this month while hosting one of The Made Man tour stops in Philadelphia.

“I knew all these amazing men,” she said. “I thought, let’s get together and give back. If we’re going to give the underserved something, let’s acknowledge the people doing it,” said Dele, a native of Yeadon Borough in Philadelphia’s neighboring Delaware County.

“The thank-you is not really what a lot of accomplished men look for, they look for the bridge to give back,” said Dele.

“They want to feel they’re leaving a legacy and a footprint. It’s the impact.”

Dele will announce the launch of next year’s The Made Man Africa this evening in the presence of key African leaders and members of the Congressional Black Caucus. Set to take place in Ghana, Dele is tapping into her Nigerian roots, aiming to bring together African American and African leaders. Tonight’s ceremony will take place at the Embassy of The Federal Republic of Nigeria.